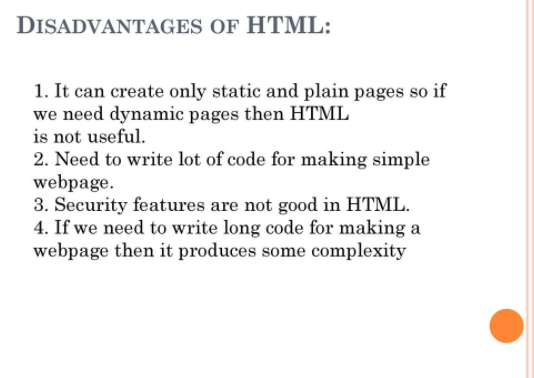 Documents meant to be displayed and browsed online using a browser use Hypertext markup language (HTML), the industry-standard markup language. HTML also helps to define the structure of a web page. There are multiple tags in it because it is a markup language. Text, tables, sorted and unordered lists, and so on can all be shown using tags. Despite its scope, there are many disadvantages of HTML.

HTML is the official name for the markup language used in web pages. HTML, or the web language, is a computer language mainly used for creating and viewing web pages on a computer. The content on an HTML page is contained within HTML tags. Let’s have a look at the HTML file’s structure now.

The file structure in HTML:

The following is the file structure in HTML:

The basic structure of an HTML file includes multiple tags. First, let’s look at some of the most important HTML tags that represent various webpage elements. There are several HTML versions to choose between. HTML 5 is the most recent version. Canvas, web socket, and other more advanced technologies are part of it.

Geo-location is also included in this list. HTML is usually an easy language to learn and use. A programmer can use a text editor to build an HTML file and a browser to run it. Data that describes the page (metadata) is located in the head part, while the visible content of the web page is represented by all the tags in the body section. When it comes to operating systems,

HTML, the first Web programming language, is still in use today, more than two decades after its release. Despite its widespread use, HTML has some significant limitations, including its static nature, its inability to visually render content, its well-known compatibility concerns, and its overall complexity. Following are the disadvantages of HTML.

Basic HTML cannot use to create a modern website with all of its bells and whistles. Web developers must master new languages like PHP, ASP, or JavaScript to use dynamically generated content. The dynamic range is developed by including code snippets written in those languages in the original HTML file.

HTML is a content-organizing language that lets you give areas of your content a virtual label. Adding an example” “This tells Web browsers to regard a piece of your page as an article. Even though HTML performs a beautiful job at organizing stuff, it falls short when visually showing it. For this reason, a new language called Cascading Style Sheets was explicitly created for handling the presentation of Web pages.

More than one file:

Designers and developers must keep two sets of files separate, one containing the website’s content and structure, the other describing how a page should look. This one is basic cons from disadvantages of HTML.

It’s possible that utilizing three different web browsers to access the same website will result in varied page displays depending on which browser you’re using. In most cases, the only thing that has changed is the space between the website’s content and the top of the browser window.

Rely on a new HTML:

Depending on the browser you’re using, some components may not be there at all if they rely on them. Few browsers, if any, support the most recent HTML5 language version, HTML5, which includes several new tags.

Anyone interested in using HTML code to build a website can spend weeks learning the basics. Web developers have to spend significant time learning how to integrate the newly added functionality with each major release of HTML as new tags are added, and others are deprecated.

Using frameworks has the drawback of necessitating knowledge of its grammar to be productive. When you move frameworks, you have to re-learn the syntax and system because each is from a different creator(s). It is why you should put in the effort and chooses wisely whatever framework (if any) you will employ because it comes with the commitment to learn about it.

The framework must prepare for anything to meet the diverse needs of everyone who uses it. So they’re usually packed with a lot of styles and scripts you won’t need. You can keep your code thin by removing the code you don’t use. To avoid this, you can seek help, develop new talents, or make do with what you already have.

A solid rule of thumb for new programmers is to stay away from the code. However, even though your website will grow in size, this is still preferable to having your website crash ultimately.

Some frameworks may be a challenge for those who don’t want their website to look exactly like everyone else’s. Some offer the bare essentials (HTML and rudimentary CSS), while others are fully styled. Everything from the interface to the form elements to the content is there.

There’s already a style to everything, so your options are to spend some time changing the rules or accept them as is. It may limit your ability to express yourself freely and erect unnecessary obstacles in your path.

Similarity still exists, but this time it is in the code rather than the visuals. Rigid architecture that covers element behavior is typical in frameworks. To make changes to these properties, you’ll have to dig through the code and do it from scratch every time or look for someone to do it.

You did not create the framework. It makes you reliant on others and puts you in uncomfortable situations where you may be forced to accept things you don’t want to. It means you’ll have to adjust if the creators decide to stop supporting a particular browser or remove a specific framework feature or stay with the older version.

Read also: Which model of the headset is the best option for you?