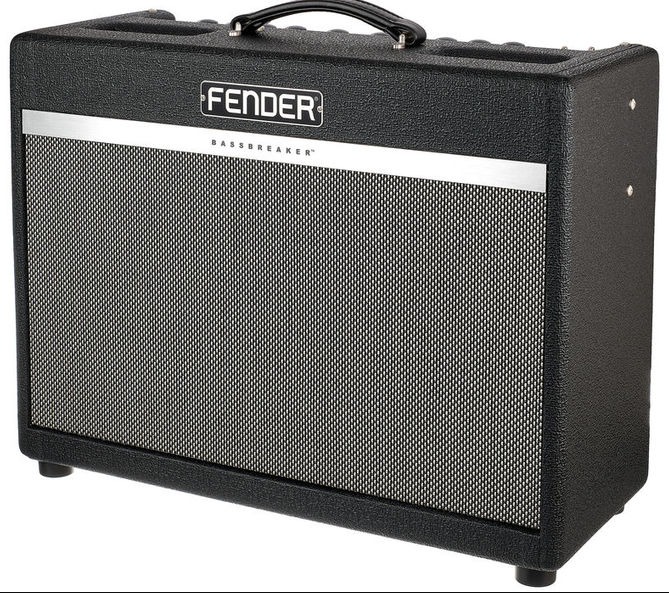 As a company, Fender has long been noted for its warm, expressive, and clear tones in its amplifiers. Headroom and rich breakdown are hallmarks of Fender guitars at greater volumes. Following is a brief fender bass breaker review.

The Bassbreaker was designed to break up at low volumes to produce a wide variety of distorted sounds. Although it only has a 15-watt power output, this tube combo’s quality and style belie its diminutive size. Let’s dig further to find out why this is one of the greatest amps under $1,000.

Solid-state and digital amplifiers typically have more complicated control panels, whereas tube amplifiers typically have simpler ones. If you’re looking for an affordable modelling amp with a wide range of effects, the Bassbreaker 15 isn’t the best option. There are no unnecessary features in the control knobs here, which is why they’re so useful for controlling your sound without any distractions.

The “gain” and “structure” dials follow the bright switch as the Bassbreaker’s distinctive control knobs. The gain knob allows you to fine-tune the amount of noise in your signal to suit your tastes. There are a few more gain switches on other amps; you’re on your own to find the sweet spot between breakup and full-on distortion with most others.

The “structure” dial on the Bassbreaker 15 streamlines the process even further. Changing the voicing of your distorted sound is as simple as turning this tiny knob, which has three possible settings. Imagine that you’re adjusting the gain dial’s parameters; by focusing on specific areas, you’ll be able to fine-tune your tone for each voicing.

The Bassbreaker 15’s gain structure is its most notable characteristic. A tube amp has a unique characteristic that sets it apart from the rest of Fender’s amplifier offerings. Three 12AX7s in the preamp stage and two EL84s in the power section are used in the Bassbreaker. According to the fender bass breaker review, higher gain levels are possible with the 12Ax7 tubes than with other comparable preamp tubes.

The Celestion G12V-70 speaker is housed inside the Bassbreaker 15’s chassis. Unlike many of Celestion’s British-voiced models, this one is more balanced. There is also a line out and effects loop and a quiet recording mode. Silence the speaker, and you’ll be able to play without having to turn up the volume at all.

According to Fender’s marketing, the Bassbreaker 15 is an all-in-one guitar amplifier capable of producing traditional Fender, Vox, and Marshall tones. Even though it may not be the best at every tone, this amp mainly accomplishes its goal. With the gain set to “low,” you may get darker tones with just a hint of grit in the clean stage. If you’re looking for a clean, immaculate sound, this isn’t the best amp for jazz or other types that demand it.

At any level, the amp’s lightly overdriven tones are among its best. Because of its dynamic response, you may add more dirt to your sound as you get into it. The Marshall-like sounds of the medium and high gain levels are more reminiscent of a Fender than a Marshall. The deep, saturated tone that drives the tubes hard is ideal for classic rock, hard rock, and even heavier music.

Bright switch on the control panel:

The bright switch on the control panel may be difficult to find, but it has a huge impact on the tone here. It has a similar sound to the top boost panel seen on classic Vox amps such as the AC30.

The Bassbreaker 18/30 is no exception to Fender’s reputation for combining beautiful looks with rock-solid construction quality. The amps in the Parallel Evolution series feature a new design philosophy that Fender refers to as “parallel evolution,” which includes a birch-ply construction covered in dark grey tweed, black grille cloth with aluminium trim, big pointer knobs.

There are a lot of accessories included with this Fender mid-range guitar amplifier, proving the amplifier’s quality and value for money. The Fender Bassbreaker 15 has the following features: You may quickly swap between three different tonal flavours with the Structure Switch.

Fender’s tubes have defined the sound of countless guitarists, and you can do the same with the tube in this guitar amplifier.

For outboard effects, this is a good choice.

With this, you’ll be able to jam with your band, practise at home, or record in the studio.

Recording equipment or a speaker system can be connected to this.

The open and airy tone of a v-type guitar is reminiscent of a classic instrument with a modern twist.

The Pilot’s Light Is Flashing:

Useful for silent recordings, this function lets you know when a speaker has been disabled.

Incomparable tone and a wide range of sounds may create regardless of genre, thanks to this amplifier’s complete tube design.

This pedal has enough range for guitarists who utilize a drive pedal while playing lead riffs.

This compact tube amp can produce an aggressive tone, even though it is only a few inches long.

Although the sound can be a touch “boomy,” this can remedy with a little fooling about with the controls.

However, at just 15 watts, it isn’t the heaviest amplifier on the market.

However, there is one caveat: While it won’t be ideal for performing in front of a large crowd, this instrument is ideal for practising at home and even recording.

The fender bass breaker review is a great choice if you’re seeking a tube amp with the flexibility of a digital model. Most guitarists will find this amp’s tone to be ideal, except a few exceptions.

Read also: Following are ways to fix Overwatch minimizing itself.