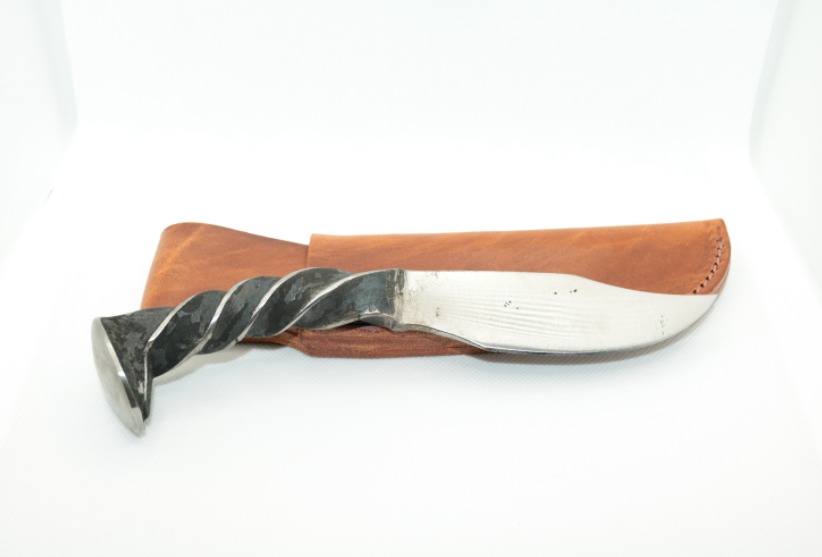 Rail spike knife: Most rail spikes on the market are not certified; thus, it is impossible to tell what’s in them unless you buy fresh ones that are certified. That is unless you’re friends with a metallurgist. Carbon steel is used to make railroad spikes, classified as either low carbon, higher carbon, or structural steel. Make a mental note of the wording: higher carbon, not higher. Comparatively speaking, the carbon level isn’t very high. So, the metal must be pliable enough to flex without breaking.

The track is fixed in place by a railroad spike. It doesn’t get worn down as a track does. For its job, it must be sturdy and tough. Heat treatment and high carbon content increase the brittleness of steel. A hammer blow causes it to break. An old Chinese saying says that a broken rail spike is useless since it can’t retain track. As a result, making things difficult isn’t a viable option. However, even if a rail spike is bent, it can still serve its purpose. Following are different ways to Rail spike knives.

That’s the baseline from which I’m gathering my data. Since it was last updated in 2013, the current standard governs the specifications for railroad spikes. Three general categories of track spike can be found here.

Structural steel can be found here. The specifications for A36 steel are explicitly stated in the standard, and this information is readily available to the public.

Once it’s been annealed, it’s a breeze to deal with. It is recommended that it be annealed to a hardness of less than 20 HRC.

1: Intend to drill them

2: A bimetal blade is a minimum need for a band saw, and the slowest speed it will go if it has changeable blade speeds is what you want to utilize.

3: Cutting at 60-90 SFPM with high-speed steel cutters is ideal for machining.

4: If you have a good machine and setup, you can get carbide cutters three or four times the performance.

5: Clamping is key, so make sure it’s strong and secure.

6: Because railroad spikes are so little, torch cutting is a little risky because they’ll heat up quite a bit.

7: If you wish to heat treat or mechanically cut subsequently, you’ll need to grind off a large HAZ.

Abrasive cut-off wheels are an excellent tool for slicing them into smaller pieces, but be careful not to overheat them. If you notice a lot of blue developing on the metal, periodically remove the disc from the cut and allow it to cool.

Forging rail spikes is a breeze because they are convenient and malleable enough to work with right out of the box. It’s best not to hit them when they’re cold. A crack will form depending on the material’s composition. If you smash the spikes below 1200 F to 1500 F, you’ll quickly break them. Only hit them when they’re glowing and only when they’re nice and hot.

How to Use Rail Spikes in Projects?

Knives should not be made from them unless they are just ornamental.  They don’t have enough carbon to harden and retain an edge. Double or triple the amount of carbon you have in a Higher Carbon spike is needed to manufacture a high-quality knife. Even if you’re starting, they’re a terrific way to put your forging skills to use. They’re useful in other contexts where a competitive edge isn’t required. There is no need to shave hair for letter openers and other implements.

Make A Rail spike knife From A Railroad Spike:

The railroad spike is one of the most critical components for securing rails and sleepers. Aside from using it as a chisel, knife, and bottle opener, railroad spikes may also be turned into a variety of other unique art forms.

Get Your Materials Ready:

5: A grinder with an angle head

To begin, you’ll need to gather your supplies and begin by heating half of the spike with its head. Clamp the head in your bench vice after it has turned red, then take a set of wrenches and assemble them as shown in the illustration. The half-head portions can be twisted in whatever way you wish, but I think a rotation or a half rotation is appropriate.

Before you can begin forging the blade, you must first remove the spike from the forge and ensure that the spike’s four sides are all the same size. Strike the blade’s sides to begin your level, then work on the blade’s rear to reverse this curvature so that it points straight ahead.

The Art of Blade Shaping:

Hammer the tip at an angle to flatten the rear of the blade, then choose the area of the blade that you want to be the blade edge up. After that, use a hammer to flatten and smooth off the blade’s edges. Make sure the back is as level and straight as the front.

It may look like a knife at this point, but we haven’t completed all the necessary processes. The spike is too straight and should be curved to look more like a knife. While heating the handle a few times with the curve straight down, raise the blade section with the edge facing up.

An individual angle grinder allows you to use your grinder to remove all the scales and grind away everything you don’t want off your Rail spike knife. Once the blade edge is razor-sharp, I don’t polish it because we need to heat treat and temper the blade by heating it in the forge to a red/orange heat and quenching it in either water or oil, then placing the blade in an oven at 350-400 degrees Fahrenheit for approximately an hour and letting it cool.

The Blade of a Rail spike knife Is Heat Treated:

We must heat treat the Rail spike knife blade after grinding it. When the blade is red/orange in color, place it in the oven for about an hour at 350-400 degrees Fahrenheit, then let it cool.

A railroad spike can be transformed into a lethal weapon with a little blacksmithing skill. My favorite Rail spike knife has to be Chandler Dickinson’s handcrafted ram’s head, which ranks among my favorite knives of all time. Many options are available for rail spikes, depending on your needs.

With Rail Spike, how do you get started?

An HC rail spike that will be cut using a blade rather than a cutting torch may benefit from being annealed. The metal will become more malleable after it has been annealed.

The heat-treating technique for each metal is unique; however the carbon steels generally follow the same procedure.

Read also: What is the purpose of a pipe vise, exactly?